It's been mentioned before on this blog that North Bergen is more than just a town, and anyone that is from town can verify that. However, what I mean by "North Bergen is more than just a town" is literally that, it's not a town, but several towns. Historically speaking, North Bergen was originally known as the "Villages of North Bergen" as the town once contained present day Jersey City Heights, Union City, Weehawken, Hoboken, West New York, Guttenberg, Secaucus and even present-day parts of lower Bergen County.  But within the town, the unique neighborhoods almost act as different towns. Most residents will identify as being from either up-town, mid-town or down-town. But if you continue to peel back the layers you will find even in those 3 parts of town there are still yet smaller enclaves. In this series we will explore the historic neighborhoods on North Bergen, from Tyler Park to Shadyside, Meadowview to Woodcliff and beyond. This first post will focus on the northern most neighborhood in town, Shadyside. 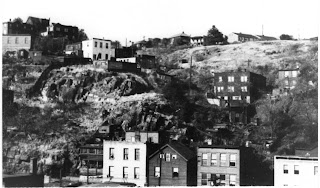 Shadyside is one of the oldest, and perhaps, most transformed neighborhoods in North Bergen. Shadyside was originally settled because it was a natural landing spot along the Hudson. Add the fact it had two passable routes to the top of the Palisades, roads we know today as Bull's Ferry and Gorge Road. Shadyside, and the roads created, fit perfectly with the people who began to call the area home. As Michael Kruglinski wrote they were "no nonsense people," and named things after landmarks and natural inspiration. Bull's Ferry Road named for the Bull family which operated the ferry at the base of it, Gorge Road named for, well for the fact it follows the path of a gorge and Shadyside itself named for shade the Palisades cast during sunset. Shadyside itself flourished during its early days. Home to a natural port and easy access for farmers to deliver their crops for the New York market and beyond, the area grew to its maximum capacity very quickly. 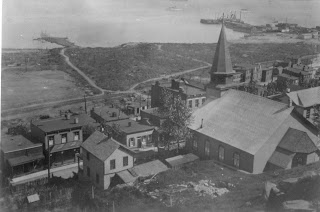 Shadyside naturally flourished. It was a riverside neighborhood that thrived as Hudson County developed in the shadow of New York City. The residents there worked in every aspect of maritime industries. With Robert Fulton's advent of the steam engine Shadyside was crossed by a railway and visited by ferries to New York as well as ships heading down river, and even across the Atlantic. It was also home to several local fishing operations. At one point the Hudson River provided shad in the spring; then striped bass, tommy cods, eels and Jersey blue crabs in the summer. All of which were fresh caught right there then sold or shipped to the surrounding markets. The other industry that fit right into the neighborhood was the quarry industry. A stone crusher was established and the Palisades pushed back, much of the blue stone found in the area came directly from this quarry. The stone was then moved by truck, rail and ship to be used throughout New York City, Hudson County and beyond. 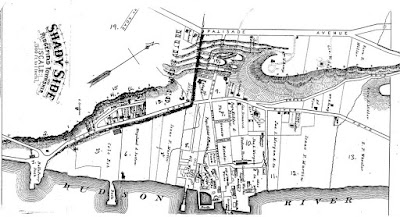 Even though Shadyside has changed greatly over time, the one place that remains constant is the old walking path. Today if you follow Churchill Road to its end you will walk right into a nearly 200-year-old foot path.  The path connects with Albert Place, which fellow local historian Ron Skokandich refers to as Upper Shadyside neighborhood. Nonetheless this was a part of the original Shadyside settlement as it sits below the cliffs of the Palisades. The path was established as a shortcut by the early settlers of the area as the alternative was to scale the rocky cliff side of the of the Palisades, which was a favorite pastime of the children that once called Shadyside home. During the 1930s the path was called Frances Place

Today, Shadyside has very little remains of its past. The Hoboken and Hudson Turnpike is now  River Road and Church Street changed to Churchill Road, The once proposed Hillside Place, which was intended to connect Shadyside to North Bergen with extensions from Frances and Albert Place, has returned to its natural state. The only true remaining marker of the original Shadyside is Riverside Place, and it is mostly in its name. The homes that line Riverside Place are mostly the original homes, however some have been greatly modified over the years, others have become dilapidated due to neglect or unfortunately torn down and replaced during the ongoing real estate development boom along the Hudson River.  The 1910 maps below along with a screen shot from Google Earth shows the lay of the area: 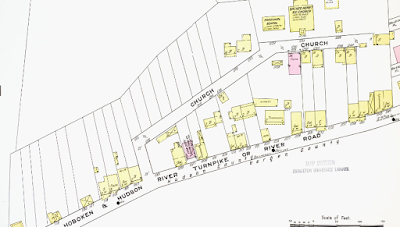 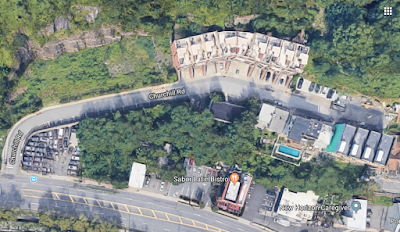 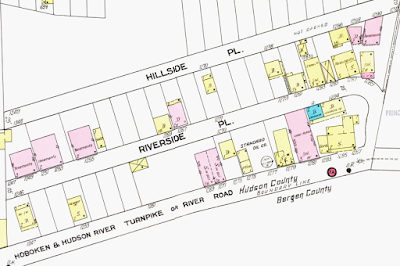 Old River Road and Riverside Place today One thing of interest was that Shadyside was at one time home to at least 10 known saloons, and several unofficial other "watering holes." Again this makes sense with its proximity to the river and the piers and the slew of sailors that once frequented the area. Add the fact that it was left on its own with little regulation from the town and practically no one to enforce the law. That said, a great local legend from the area was Patrick "Paddy" Gould. Gould immigrated to the Shadyside neighborhood from Limerick, Ireland in the 1860s as a small child. Gould became an officer of the law in the land beyond the reach of the the North Bergen Police in 1919 with the passing of Prohibition. Gould monitored Shadyside throughout Prohibition's 13 year run. As the lone lawman along the river it was up to him to keep Shadyside as dry a possible, a seemingly impossible task being home to 7 well-known speakeasies at the time.  He walked his beat during the afternoon and evenings. The North Bergen Police Department held Gould in the highest regards, "This guy, all alone, in that remote, crowded speakeasy place with mean sailors and barge people...” as we can see, Shadyside was the one area of North Bergen no one thought could be tamed. Gould's only way to reach help was a call box on River Road, the response time for back up is unimaginable today. Regardless, Gould was known to frequent the speakeasy locations while on duty to enjoy his pipe, he never drank while on duty...off duty is a different story. Michael Kruglinski described one incident when Gould had to take on a speakeasy's disorderly  patron, "Paddy almost jumping off his feet to beat the giant on the back with his night stick. Each lick made a boom noise on the giant’s thoracic cavity. Wow! How’s that for maintaining law and order?" It was because of Gould's actions during prohibition he was dubbed the "Chief of Shadyside." He made numerous arrests, issued countless fine and keep law and order in Shadyside throughout Prohibition...on his own. When Prohibition ended in 1933, the North Bergen Police saw Shadyside's population and crime rate decline, but still kept Gould on duty. The neighborhood was much quieter during the rest of his time on the force. He passed away in 1936 after a slip and fall at the age of 73 and as the only active police officer in Shadyside. 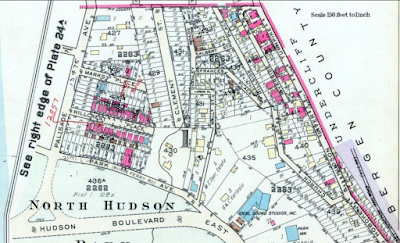 G.M. Hopkins Co., Hudson County 1934 Vol 2 Courtesy of Historic Map Works Today, the names of roads have changed, the original residents and their families have moved, the bars, piers and harbor are gone. New road names, new residents and new developments have taken over, but Shadyside still endures. New life has been added with restaurants like Sabor Latin Bistro, Porto and Viva Margarita (technically Edgewater) seem to only be the beginning for the new Shadyside. The luxury townhouses of Churchill Road continue the legacy of residents enjoying the seclusion and shade of the Palisades, along with the newest developments along Riverside Place.  The area is still seen by most North Bergen residents as really not belonging to the township. Likewise some residents still have a disconnected feeling from the town. Yet, it still has one of the richest histories in North Bergen. With its continued evolution, the neighborhood will continue to have life as it adds new chapters to its history. It has come a long way since the first settlers developed the area nearly 200 years ago and is exciting to see what the future holds for Shadyside.